My paintings are often selected for showing at The Federation of Canadian Artists, on Granville Island, Vancouver BC.

My Painterlogues, now in the fourth year of creation, are well received.

I have committed solo exhibitions in Vancouver BC in 2022 and 2023, The Title of these shows will be:-

“Dr Jekyll and Mr. Hyde” and “Betwixt and Between”.

I have recently completed a showing acrylics and watercolours at the Unitarian Church Gallery, W. Vancouver BC and am preparing for shows at the Niche Gallery Granville Island, and Hycroft Manor, At the beginning of November 2022, I opened a new Studio at the Federation Studios Granville Island.

My painting has developed on many levels.  Before becoming a full-time painter, I worked as an architect, planning and designing mostly healthcare projects. 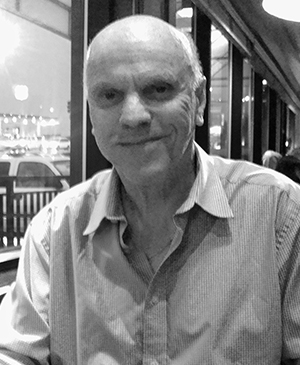 I studied at and attended painting workshops at The Federation of Canadian Artists, Emily Carr University of Art and Design, in Vancouver BC and several in San Miguel de Allende, Mexico, notably Jane Dill,  Susan Santiago, Thomas Schaller,  and Bob Burridge.  I like to read and am writing a creative fiction novel.  Also projected for 2023 is a colour book of my work which will include up to 50 acrylic and watercolour paintings, and also I plan on creating a book of my Painterlogues.  My other interests include learning to play the Guitar, Art, and travelling where our most recent visits have been in Mexico, Europe, Scandinavia, Russia and the Mediterranean.

I was born in England. My parents moved to Scotland when I was 11, where I spent my informative years including gaining a degree in Architecture at the Glasgow School of Architecture.  I practiced Architecture in Scotland and Nigeria before moving to Vancouver BC in 1974, where I retired in 2013.

My places of work included Scotland, the Caribbean, Mexico, Indonesia, Nigeria, the United States and Canada. The three years in Nigeria taught me much about applied arts and sculpture, which also piqued my interest in First Nations Art.

My wife and I stopped returning to San Miguel due to the many changes occurring there to the detriment of the Sanmiguelenses; the culture towards tourism, and the loss of freedoms of the local people who cannot carry out many of the rituals and festivities that caused us to love San Miguel. So, now we are staying full time in Vancouver and travelling throughout British Columbia to learn more about our province.

My paintings are intuitive, en plein air and impressionist working in mostly watercolours but sometimes in acrylics from the abstract to impressionist.  I am engaged in continuing my series of acrylic mixed media paintings, and a new series of Landscapes of British Columbia, named “Dancing Light: Changing Seasons of British Columbia”   In general my work spans a broad range of subjects and styles, including landscapes, buildings and seascapes.  I attempt to create a feeling, an impression, rather than a picture, to evoke a deeper emotional response from the viewer. Recently, I found a new expression in acrylics, using joint compound (plaster) impressions of various shapes; and also using tissue paper, applying acrylic colours, cutting up the paper and applying the pieces to a gessoed board. These paintings include, for me, new approaches and applications to my art. Abstract painting is about memory, passion and expression. I have ventured into painting larger canvasses, 48″ X 24″.

I like to work in watercolour, with as much under-drawing as I can get away with. I like the unpredictability of a medium which is affected as much by humidity, gravity, the way that heavier particles in the wash settle into the undulations of the paper surface, as by whatever I wish to do with it. In other mediums I have more control, I am responsible for every mark on the page — but with watercolour I am in a dialogue with the paint, it responds to me and I respond to it in turn. This encourages an intuitive response, a spontaneity which allows magic to happen on the page. When I begin a painting, I usually work up from small sketches — which indicate in a simple way, something of the atmosphere or dynamics of an illustration; then I create drawings on a larger scale. When I’ve reached a stage where the drawing looks complete enough I’ll transfer it to watercolour paper, but I like to leave as much unresolved as possible before starting to put on washes. This allows for an interaction with the medium itself, a dialogue between me and the paint. It’s fun to see where it goes!

I have had twelve solo Art Shows: nine in Vancouver and three in San Miguel de Allende.  I have two more in Vancouver in late November 2021 and May 2023. I have been jury selected several times for shows at the Federation of Canadian Artists on Granville Island, Vancouver and once in Toronto.

My paintings are in galleries and homes in San Miguel de Allende, the USA, Canada and the UK.

“Don’t think about making art, just get it done.  Let everyone else decide if it’s good or bad, whether they love it or hate it.  While they are deciding, make even more art.

“The object of art is not to reproduce reality, but to create a reality of the same intensity.”

“In watercolor, if you are not in trouble, then you’re in trouble.”

“Because watercolor actually moves on the paper, it is the most active of all mediums, almost a performance art.”

“Everything about watercolor appeals to me, but perhaps above all, the peculiarities of the medium tend to challenge my efforts to control it… it’s more like a performance or a dance.”

“There’s so much versatility in watercolour. You allow the paint to roll around, and then drop in some colour, just one that takes your fancy, and watch it explode into a shape that morphs into something else… lots of fun.”

Some favourite quotations about acrylics

“Time is not the enemy with acrylics. Think of the fast-drying characteristics of the medium as an invitation to paint and repaint, until you see something you like.” (Brad Faegre)

“I miss that smell of an oil painter’s studio… Acrylic companies should put an interesting aroma in their product.” (Nina Allen Freeman)

“In acrylics, what you lose on the straights you make up for on the corners.” (Robert Genn)

“Acrylic is the only painting medium that can be all mediums – it can act like watercolour, it can act like oils, and it has its own innate properties.” (Andrew Hamilton)

“Acrylic has an ‘open-door policy’ – once you learn one thing about this medium, a door opens and you realize that the learning possibilities are endless.” (Earl Grenville Killeen)